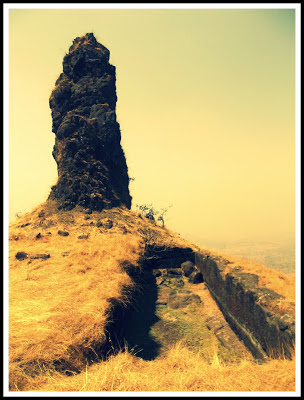 Padargad is a small fort near the peak of bhimashankar at an height of 2202'. It is difficult to climb and there is a rock climb. One should carry a rope

We went there about 7 people. We all started from Dombivli station and took a last local train for karjat(1.54am, midnight) and reached there at 2.57am something. We had booked one private vehical in Karjat. We had to go to Khandas(the base village). 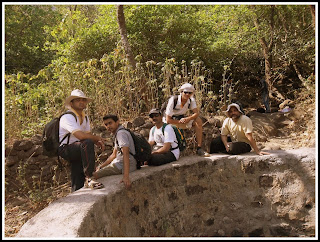 After that the real trek began. It is a regular path as it is the path leading to bhimashankar too. The path went on level ground for a while and then began to ascend. We walked a lot till we reached a ganpati temple. Due to this temple this ghat is known as ganapati ghat. Then then there was another steeper ascent to a plateau at the end of which there was well. From here padargad looks beautiful.
Then  we took the path which branched off from the main path just after the well which led us to padar fort. The path to padar went into a jungle. Another path branched off and it emerged out of the jungle to a gully ascending steeeeply to the fort. There were a few boulders and there was a small tree supported scree patch. At the end of the gully,there is a chimney. Few of the group went up to trace the routewhich had a rock patch. We were stuck in the chimney for 45 mins at least. The chimney was tackled by a small climb(difficult for some of our members as anybody hasnt any experiance of chimani climbing). It was a bit difficult. At the end of the climb was a scree patch the rope took us to the top of that patch. From here We could see peth fort clearly and the peak of bhimashankar too. We noticed that we had climbed a lot! The route ahead was simple but not easy. We could spot some steps here. There was another very small climb (fortunately in the shade-we had come on to the other side of the fort face. After that broad and big steps lead us to the top plateau. 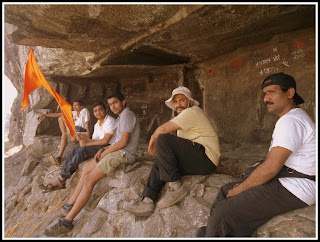 Here was nothing atop the fort excepting a few dry water tanks. A small cave was also siuated here. This fort is also known as 'Kalavanticha Mahal'. There was a big pinnacle and another smaller one atop. The cave was on the face of the bigger pinnacle. The view was great from here one could see peth, bhimashankar, sidddhagad clearly. We done this trek without any rope but it is necessary to have one experienced guide for both the big patches.
We took rest in caves and after some cam clicks we headed back to down for lunch which we already booked to some villager on the way from khandas. after luch we came back to khandas(base village) @hired jeep for return to sweet home with lot of new experienced of CHIMANI CLIMB.....