MAHULI FORT
Mahuli Fort At 2815 ft., It is the highest point in the Thane district. The forest surrounding Mahuli has been declared as a sanctuary. Besides an open Shiva temple there is a small perennial drinking water cistern on top, three caves of which the larger can be used as overnight shelter, like as on many other such natural hill forts of Maharashtra Western Ghats. There is a stone arch historically known as the 'Kalyan Darwaja' but the dome of the arch is now broken.

We reach Asangaon by Kasara train. From Asangaon station by walking or by auto we reach at Mahuli gaon. It is 5 km away from Asangaon station. After get down by train we crossed the national highway (commonly known as 'Agra Road'), walked about 1 km towards Shahpur on the highway. Then turn left on the road going to Manas Mandir (a religious place for the Jain community) don't turn right for Manas Mandir but keep walking straight ahead past a government forest check post, towards Mahuli Village. Walk through the village and reach the Shiva temple right at the base of the fort. From this way we have to go by a ladder. The climb was steeper when we were at the base of the fort. Finally we landed up below an iron ladder that's strategically placed over a tricky rock patch just below the fort walls. from the ladder, we could see the Flag of the Maratha. We climbed the ladder after 4 hours of trekking, we were on top of the fort.
In another 10 minutes, we reached a couple of caves. Under a tree above the caves, there was a Shiv-Ling along with idols of Lord Hanuman and Chhatrapati Shivaji Maharaj. We went towards Bhandargad to see the Kalyan Mahadarwaza along with the multiple pinnacles and towards Palasgad to view the Tansa Lake. Also, it was raining heavily. Important thing was we had one printed map which was taken from Google Image Search. 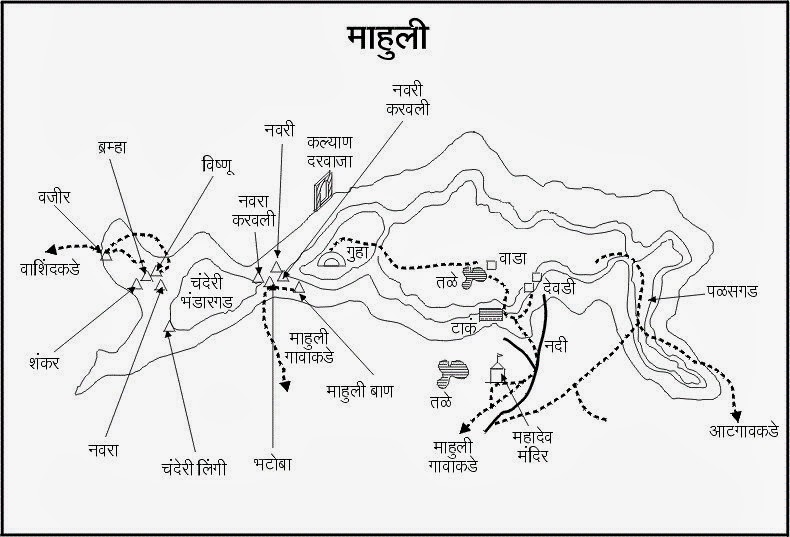 And we desided to find every palce shown in the map.

We had succsessfully found most of the things exclude Kalyan Darwaja and Bandargad/Chanderi.
As I said because of rain it was getting more difficult to find those things so we desided to get down for Village for Lunch.

Overall, it was an exciting, adventurous trek that pushed us to our limits physically.

Note:
Water is available in reservoirs in front of gatehouses at Mahuli.
Mahuli is Easy from Asangaon- this is most trodden way.
It is Difficult from Vasind. It will take 6-8 hours from Vasind (Kalyan Darwaaja).
Please do not take vasind route in mansoon

Some Pics From Group :