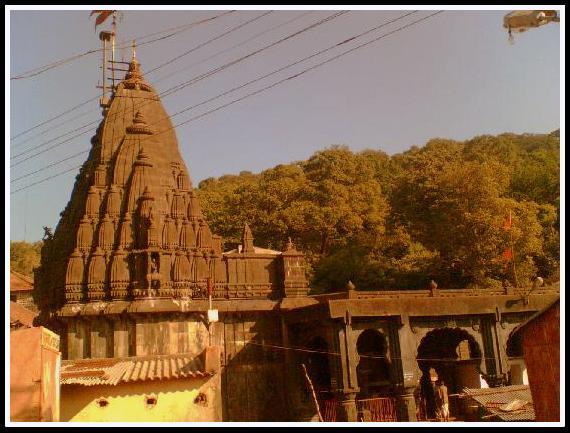 
History :
There was a demon Tripurasura who did penance in the jungle of Bhimashankar very long ago i.e. in Tretayug, to please Lord Shiva in order to achieve the gift of immortality. 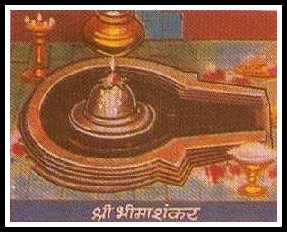 Lord shiva, who is specially known for his kindness towards his devotees, was pleased with Tripurasura's commitment towards him. So as usual, he blessed him with the power of immortality with a condition that, "He should strive in the best interest of people, or he may be sued permanently for violating the condition. "
With the flow of time, Tripurasura forgot the condition to which he was abided, and eventually started harassing people as well as other deities. There was a chaos for which all the deities approached Lord Shiva for remedy. Thus in order to sue Tripurasura, Lord Shiv prayed to Goddess Parvati (Kamalaja Mata) in order to help him to accomplish this task. Accordingly Lord Shiva and Goddess Parvati underwent a new form which is popularly known as "Ardha-Narya-Nateshwar" and killed Tripurasura on Kartik Pournima which is known as "Tripurari Pornima". After the death of Tripurasura his wives (Dakini and Shakini) went to Lord Shiva with a question of their existence without Tripurasura. Thus Lord Shiva blessed both of them, with the power of immortality which he did to Tripurasura. Henceforth the real Bhimashankar is known as "Dakinyam Bhimashankaram".


How to get there :
We took a train from Mumbai city to Karjat station. After the 90 km journey, you can hire a taxi, tumtum or use bus transportation (ST buses) to reach Khandas village which is roughly 40 km away. Once there, tourists have the option to trek by the Ganesh Ghat route or Shidi Route to reach Bhimashankar.
We took Shidi Route for thrilling experience

Our Story to Bhimashankar Temple :
Date - 14/07/2012 We all took the last Karjat Local to gather at Karjat Railway Station. The local reached Karjat @3.00am. After a couple of hour rest we get the Tum-tum (big scale rickshaw) for Khandas (small village at the base of Bhimashankar). Then we start our journey via shidi route. it is really good and adventures route to reach Bhimashankar Temple. Only 2/10 of group were going by Shidi ghat hence it was good one. Right from the start of that route, the medium climb was on every 30 minutes of walking, We encounter a waterfall in and a river over waterfall that was obvious we had fun in this waterfall After crossing this river, again the small climb continues and after 1 hour of trek is finished, we encounter the first ladder affixed in rock. The scene from this is immaculate from this point. Going hand in hand After crossing the first ladder,there are rock patches all over hence after careful climbing of 1 hour and after crossing the remaining 2 ladders, we reached few huts on a flat plateau After reaching here, we reach halfway mark. At this point,the route coming from Ganesh ghat meets the Shidi ghat route. This point is the halfway/Interval of the trek At this point, we had tea/snacks and food, again the steep climb starts.These climbs were like a never ending story.It continues on and on. Finally after 3.5 to 4 hours hours of walking from the base village, we finally reached the open ground on the top nearby the stairs of Bhimashankar Temple.We started the trek around 10am and reached Bhimashankar top around 3.15pm.


One thing I forget to mention here we were with one big group from Vile Parle, Mumbai (Mount Hunters) They use to come here every year in monsoon. They had done all arrangement to stay in some Dharmashala. Their company were very good and all fun. we played some game also while visiting Nagphani (see Image).

Another day of our trek, we went to visit Gupt Bhimashankar It has hidden shiv ling under the small river waterfall (see image) That was the last option which we visit and return to Dharmshala for rest and had some food for start our return journey to Home.

Some Pics From Group :
http://sahyadriskada.blogspot.com/trektobhimashankar/pics